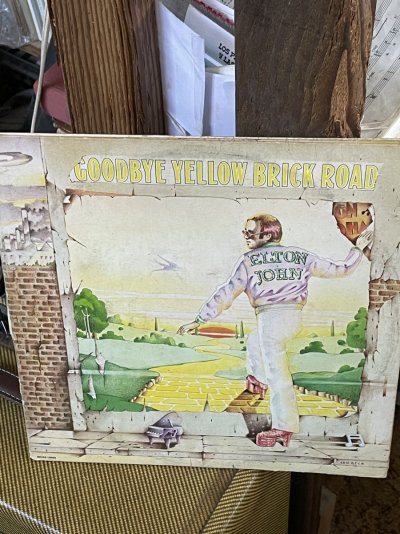 i am playing air piano and jamming out. lol. it's like being 11 again, but with a torch and solder.

I do love this record, one of my all time fav.

One of the greatest albums ever recorded. Damn...Elton and Bernie were on it.

Music to plumb by

If we had to stack the ten best rock LP's that came out of the 70's, that would be very near the top of my pile.

I nose a thang or two.

Wow... that takes me back. Cutting class (whooopss don't tell anyone) listening to cuts from that album that were on the radio followed by BTO and Boston.

plumbing is done. record is done. all went well. thanks Elton.

Love that record and specifically the title track. If you want a jaw dropping change of pace, take a watch/listen to Sara Bareilles’ live version:

Somebody bought me the album on cassette for Christmas as I remember. I would have been 14. Benny and the Jets wasn't long enough...

In 1984, IIRC, the one hit wonder band booked to play Brunel University's Runneymede campus's Student Union Christmas ball canceled at short notice to do Top Of The Pops.

One of the lasses on campus had a small job mowing Reg Dwight's lawn, so, in some desperation she went over to his house, explained the situation, and asked Reg if he knew any upcoming bands that could stand in.

"Yes, there's a big old grand in the ballroom. Hasn't been tuned since World War ONE but we've got a piano."

" Right. Get it tuned and leave the rest to me."

Reg gets hold of his backing band and they play a two hour set. Free of charge.

An album that has Social Disease and All The Young Girls Love Alice...and also has this and Candle In The Wind...has to be some of the greatest songwriting and performances ever recorded. It might be the GOAT.

Man, it is really takes me back.

What a great album.

UK, somewhere in the Midlands

I don't think Elton ever bettered this album. I bought it on vinyl when it first came out, and have always owned a copy, though my copy now is on cd.
Funeral For A Friend / Love Lies Bleeding is a great opening for the album. His band was smokin' back then.....( and I don't just mean the old Mary Jane

I own one Elton John CD, and it's this one. Great album!