Does anyone here actually own a Vega-Trem?

Fastdraw said:
I have been on the fence about trying out the Vega-Trem on one of my strats.
Does anyone on this forum own or have played a strat with this Trem system?

I have had one installed in a Squire body-based partscaster for a couple of years and I love it. I built the partscaster using the Squire body because it's alder and super light and resonant. The Vega Trem just totally brought an already-resonant guitar to life. The harmonics just shimmer to an expanded dimension or 'prettiness' and it's a beautiful and organic sound. It can be as aggressive as it could ever need to be while eerily light to the touch. It is by far the most expressive and versatile whammy bar I've ever tried and it holds tuning better than most stock ones in my experience. If the tuning slips then usually a quick slackening then a short pull up and release will usually bring them back pretty well in tune.

The small physical mass might give people who listen with their eyes and brains doubts but whatever metallurgy they used is pure sonic alchemy to my ears. Other reviewers have commented on their guitar's tone being improved after installation. That's certainly what I experienced and the difference wasn't small.

The best analogy I can think of is if you had a Cadillac and traded it in for a Maserati. Using the Vega Trem often makes me think of driving a Maserati for some reason due to the nimble and responsive handing.

No, I don't make any money from this reply. Just a real fan! I'd be very curious to know if you try one and what you think.

jjaaam said:
Could never get past the name. Sounds like a late-night infomercial product LOL…like “Vega-matic”.

Vega is an Spaniard last name

It's also the name of a GM car that was their competition for the Pinto.
There are still a lot of Pintos on the road.
Vegas are nearly unicorns these days.

Foothills of the Cascades

...and the name of an Norwegian island group; the Vega Archipelago...
And the name of brightest star in the northern constellation of Lyra.

(also the name my daughter gave to the dog she adopted and a year later left with me for a weekend and ... that was 7 years ago.
I renamed the dog Little Bit.)

CB91710 said:
It's also the name of a GM car that was their competition for the Pinto.
There are still a lot of Pintos on the road.
Vegas are nearly unicorns these days.
Click to expand...

If the GM card ignorantly, or not, took the name, so be it. It is a Spaniard name and has been long before these side of the world was discovered.

Super vee blade runner and vega trem look to be the same concept. I don't own either one, but I would try one if I needed a new bridge for some reason.

jjaaam said:
Could never get past the name. Sounds like a late-night infomercial product LOL…like “Vega-matic”.

As others have noted, the Spaniard who engineered and sells the trem is Isaac Vega. The name is pronounced with a hard "G", rhymes pretty closely with "mega", not pronounced "veja".

Fenderbaum said:
Leave a pretty ugly gab in the body
Click to expand...

It does, but... the Vega's bar can be pulled up further than a Fender-style trem because the bridge plate clears the back of the rout, and can move down into the cavity without bottoming on the body top (according to one youtuber, it permits bending a full step higher pitch on the low E, and a full step and a half on the B-string).

the Vega is a nice looking, well-made trem... but there it stops.... other that those two attributes, it's no better than any other trem with basic architecture.... The number one issue with a tremolo is the pivots... it's at that point that metal rubs against metal... smack all the lubrication ya wanna .. it's still metal rubbing against metal..

now the Vega trem.. the "blade" rocks in a V channel for the full length of the base plate or.. around 2.5 inches or around 63mm... think about that a minute...

now.. what if there were NO pivots where anything rubbed against anything? Where the overall quality was just as superb... and the price was actually a little less. . . although not by much...

Disclaimer.. I have no interest in the Super V products.. 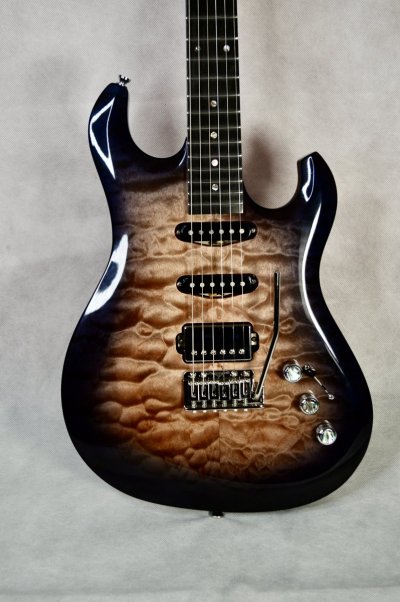 Ronkirn said:
the Vega is a nice looking, well-made trem... but there it stops.... other that those two attributes, it's no better than any other trem with basic architecture....
Click to expand...

The Super Vee system looks very interesting to me also—I've tried neither of these systems, and don't have affiliations with the manufacturers.

The Vega has quite a few positive reviews from Youtube guitar authorities that I trust, but it does seem like it could have some long-term issues with wear? Other than the Vega's unique but more conventional knife-edge pivot which the Super-Vee's spring-style pivot dispenses with, the Vega has two characteristics that the Super Vee apparently lacks. These I think are positive: the swiveling friction of the Vega trem arm can be tightened/loosened on the fly with the friction nut while playing, so you can change from a free-swinging arm to a tight stay-in-place arm while you're playing. Second, it's plate can sink into the body and doesn't "deck" so it has a broader pitch range when raising pitch by pulling up on the arm.

The saddles on the Vega intonate and lock in a unique way, whereas the Super-Vee's saddles appear to be mechanically more like conventional Fender-style saddles. The Super-Vee, depending on the options you choose, is less expensive, and can be installed with the optional "mag-lock" which apparently permits country-style multi-note bends without pitch excursions on unbent fretted notes (mag-lock option adds about $60-$70 to the Super-Vee). Not sure how the mag-lock affects the feel of the trem. I suppose the mag-lock could be installed with the Vega, but that would add expense to the already pricey Vega if so.

I've bought some pretty nice Squier strats for less than the price of either of these trems.

Tim Pierce says that the Vega also permits country-style multi-note bends without pitch excursions if you use your palm to limit movement of the plate. He likes the Vega's feel and tone. His review:

Seekir said:
As others have noted, the Spaniard who engineered and sells the trem is Isaac Vega. The name is pronounced with a hard "G", rhymes pretty closely with "mega", not pronounced "veja".
Click to expand...

Fully aware of that. Was trying (unsuccessfully, obviously) to make a joke.

jjaaam said:
Fully aware of that. Was trying (unsuccessfully, obviously) to make a joke.
Click to expand...

CB91710 said:
It's also the name of a GM car that was their competition for the Pinto.
There are still a lot of Pintos on the road.
Vegas are nearly unicorns these days.
Click to expand...

Bob the builder said:
I learned how to drive in a 3 speed vega
Eventually I crashed that one too

Was a shame... looked like a baby Camaro. Nice design, economical at a time that was becoming important.
But it was a terrible car.